·         For a 360° capture with 8 images: PackshotSpin turntable took one picture then continually spun. Customer had to force quit the software. Later, the camera took 8 pictures, but the turntable never moved. (Customer was using PackshotStudio Multi-Side on Windows 10).

Originally we thought it was an USB issue. The customer was using a 16ft USB cord on a laptop. But the second problem suggested more than that. Communication with the PackshotCreator device was the main issue. We suspected the PC board had a problem so we went to Device Manager. 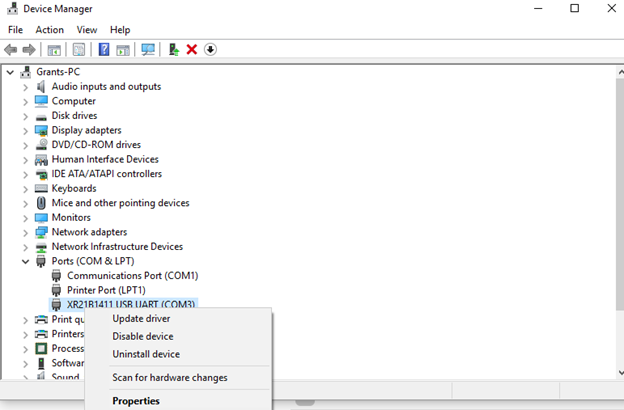 We looked to see what driver was being run – Prolific or EXAR (note that Prolific driver does not work on Windows 8 or 10).  We then found that the device was using the EXAR driver - XR21B1411 USB UART (COM3).

Then we right clicked on the driver and selected "Properties". We noted that the driver was Exar Version 1.8 from 2012. It was an old version so that could be the problem.

Solution:
Note: if you cannot simply “Update Driver” by right clicking on the driver, contact our e-support and we will downloaded the latest driver and emailed you a copy in order for you to install.