If the customer is using a Mac that uses High Sierra and they are unable to get into the PackshotCreator program because when they try to run the software they get a message that states: “A PackshotCreator device must be attached”. Then, most likely the EXAR and PROLIFIC drivers needed to control the PackshotCreator hardware are not being recognized by the Mac OS.

·         Mac Yosemite, El Capitan and Sierra all allow the user to easily accept and use 3rd Party Drivers.

·         High Sierra got more stringent on Secuity. It removed the ability to “Allow apps downloaded from: Anywhere” (see picture below in the screen capture of the Sercurity and Privacy page.

·         In 10.13.6 – Apple is trying to make it easier to solve this issue – the give more pop ups to guide the user to the Security and Privacy page where the drivers can be “Allowed” or in their new language software can be accepted from “Unidentified Developers”

Since the software has already been running and the user got the error:

Step 4.  Uninstall and re-install the latest version of PackshotCreator software – must be using V1.0.9.76 or higher.

Step 5.  Once the software is installed, plug in the PackshotCreator hardware by USB

Step 6.  Open “Security and Privacy” window. At the bottom of the General Tab look to see if it mentions that drivers were blocked or drivers from a 3rd party need to “Allowed” for use. Below is an example. Click “Allow” 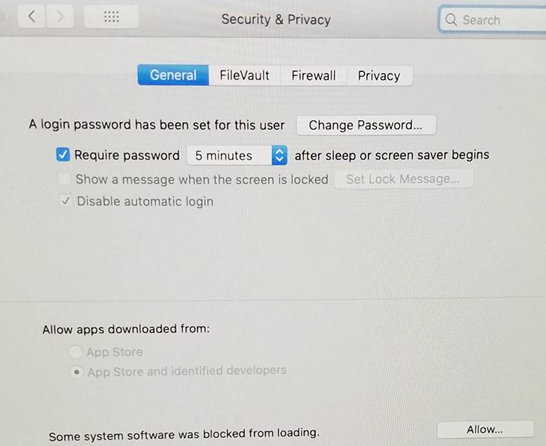 Step 7.  After clicking Allow, try running the PackshotCreator Software again.  If the same message appears, then:

1.       Unplug the PackshotCreator hardware from the computer by USB